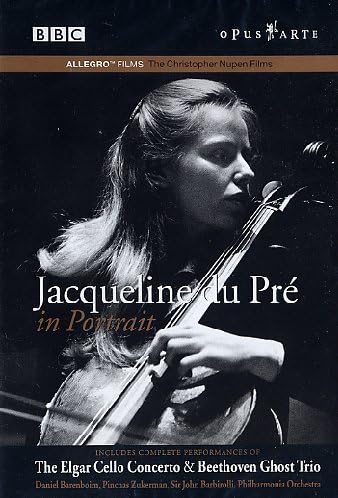 The subject of the 1998 film "Hilary and Jackie" and gracing the cover of the August 2004 issue of Gramophone Magazine, the cellist Jacqueline du Pr� remains as vibrant a figure in the public mind as she had been at the pinnacle of her career � before it was cruelly short by illness in 1973 when she was only 28 years old. The tragedy of her death is still felt by people all over the world, because this great cellist had ways of touching the heart that are given to very, very few.

Jacqueline du Pr� and the Elgar Cello Concerto, a documentary by award-winning film maker Christopher Nupen, explores the artistic personality of one of the finest performing musicians of the twentieth century, with the recurring theme of her special relationship with the Elgar痴 melancholy Cello Concerto. The film begins with an account of what she did after the onset of her illness when she could no longer perform in public. It ends, at her own request, with a re-edited version of the original portrait film which sketches her childhood and the development of her musical talent, her meeting with Daniel Barenboim and their marriage in 1967, her special relationship with the Elgar concerto and, finally, a complete performance of the work with The New Philharmonia Orchestra conducted by Daniel Barenboim; a performance which has become legendary.

This DVD portrait also includes Nupen's film The Ghost, which features a performance of Beethoven's Piano Trio No. 5. This is the first in a series of Christopher Nupen films on DVD.

Future titles will include Schubert's The Trout with Jacqueline du Pr� and Andr駸 Segovia in Portrait.